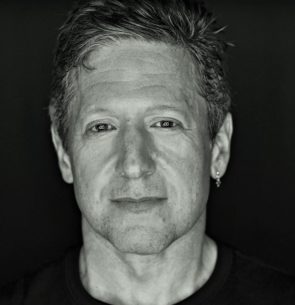 While young in spirit, snappy in dress and extreme in jewelry, Andy Nulman has been creating and leading major media projects for four decades.
Currently, he’s co-founder and CEO of Play The Future, Inc. a forward-thinking digital platform/brand engagement tool that converts the big data points and events of major brand into consumer engagement and entertainment; a natural progression for a tech entrepreneur who believes that “Life’s A Game!” In addition, in a part-time role as “Chief Attention Getter” of 375 MTL, he’s responsible for audacious, head-turning projects to set the stage for Montreal’s spirit-renewing 375th Anniversary celebrations in 2017.
Back in July of 2010, Andy once again took on the position of President, Festivals and Television, of Montreal’s renowned Just For Laughs International Comedy Festival, the world’s first and largest comedy event. This was Andy’s second go around at JFL; from 1985 until 1999, he literally transformed the event from a two-day show to a month-long cultural happening, attracting over 2 million visitors per year to see talent the likes of Jay Leno, Drew Carey, Jim Carrey, John Cleese, Jerry Seinfeld, Chris Rock, Ray Romano and Adam Sandler, and created/Executive Produced over 150 Festival TV shows, in a variety of languages, all over the world.
During the decade in between Just For Laughs stints, Andy was President and CMO of Airborne Technology Ventures, a company celebrated as a pioneer in the industry of mobile media and marketing. In 1999, Andy co-founded Airborne (then Airborne Entertainment) with Garner Bornstein, and provided the company with the insight and creativity necessary to successfully strengthen brands like Family Guy, Disney, Maxim, the NHL and the NFL through the creation of innovative mobile content and applications. Airborne was sold for over $100 million to Cybird of Japan in 2005 and was honoured the following year as North America’s 4th-Fastest Growing Tech Company in Deloitte’s Fast 500 ranking.
Andy is an acclaimed, thought-provoking and risk-taking public speaker, who has motivated and entertained Fortune 500 companies the likes of GM, Eveready/Energizer, 3M and Wal-Mart. In 2013, Andy broke new ground as his “Grow Wings” speech was the most popular presentation at Montreal’s annual C2-MTL commerce and creativity event, where last year, his interview with actor Alec Baldwin drew unanimous praise. He has also been a frequent speaker at McGill University, including being honored to speak at the prestigious McGill Alumni Leacock Luncheon and the McGill Institute for the Study of Canada. He now teaches the revolutionary “Marketing and Society” class in the school’s BCom program, where his students learn how to build YouTube channels and use them as a powerful corporate tool.
Over and above his speaking, Andy has written three books: “How To Do The Impossible,” “I Almost Killed George Burns” and his most recent “Pow! Right between The Eyes! Profiting From The Element of Surprise.” Other accomplishments include being named one of the “Top 40 Under 40” business leaders by the Financial Post in 1997, being voted one of the Top 100 Montrealers of the 20th Century by the Montreal Gazette in 2000, and being honored as a distinguished recipient of the McGill Management Achievement Award in 2004.
In his spare time, Andy is also an inventive stage director, half-decent snowboarder, obsessive gym rat, newbie hockey forward (after 20 years as a goalie) and gutsy rock singer. Married with two grown children and two rambunctious dogs, his major disappointment.

What does it mean to fail? To some of the most successful Canadians, it is a rite of passage, a stepping stone to greater things, or even a brilliant source of inspiration. Olympic golds, successful businesses, pioneering medical advances — all came about after a series of missteps and countless attempts. Panel moderator Christina Tessier […]